Are you looking for sexy girls who fart as much as they want? Come closer and - do you already can smell it...?

Mistress Sam and her friend learned of fart fetish and they were dying to try it. But none of them wanted to be the first one to smell the farts of the other one. So they played a game which Sam won and took the first turn to humiliate her friend. She got on top of her and facesat on her wearing only her panties. She then made her friend inhale her farts. It was epic for both of them and they became addicted to it. 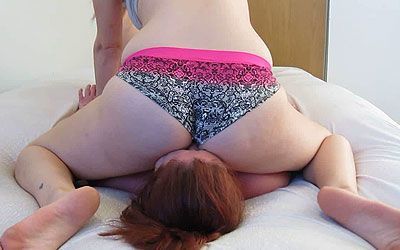 Mistresses Sibilla and Aurora wanted to show Alexandra how to punish slaves and losers. She was new to their group and she needed to learn how it was done. But the other mistresses wanted to show her practically and since there was no slave to humiliate, they did it to him. They forced her to lie down and they made her lick and smell their farts as they facesat on her.

Mistress degrades guy by forcing him to inhale farts